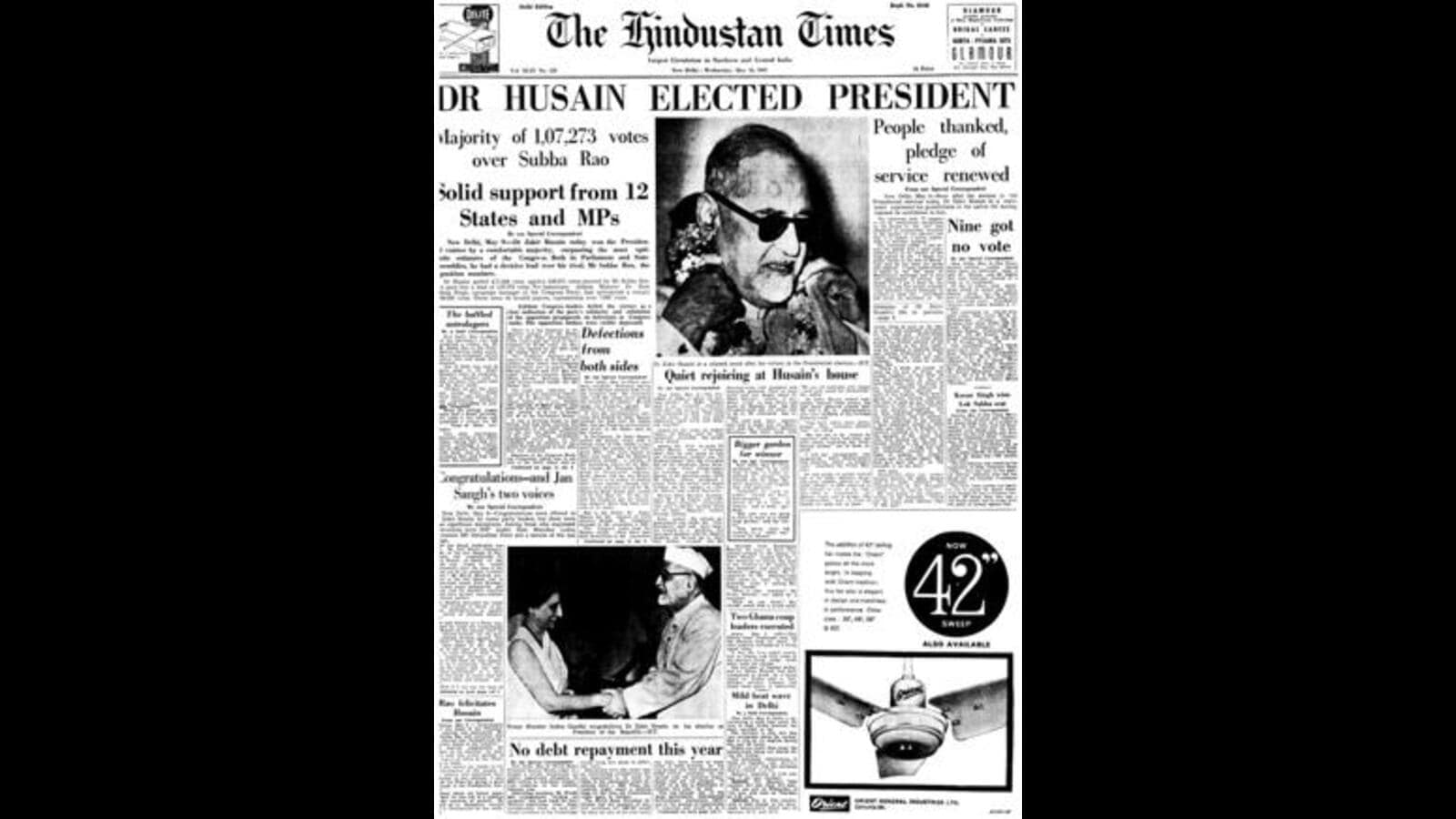 Dr Zakir Husain today won the Presidential contest by a comfortable majority, surpassing the most optimistic estimates of the Congress. Both in Parliament and State assemblies, he had a decisive lead over his rival, Mr Bubba Rao, the position nominee.

Dr Husain polled 4,71,244 votes against 3,63,971 votes secured by Mr Subba Rao. is gave him a lead of 1,07,273 votes. Parliamentary Affairs Minister Dr Ram Subhag Singh, campaign manager of the Congress Party, had anticipated a margin 60,000 votes. There were 41 invalid papers, representing over 7,000 votes.

Jubilant ‘Congress leaders hailed the victory as a clear indication of the party’s solidarity and refutation of the opposition propaganda on defections in Congress ranks. The opposition leaders were visibly depressed.

There is a big disparity in Dr Husain’s margin over Mr Subba Rao in the State Assemblies-of 7,454 votes-and the lead in Parliament-of 97,344 votes. Dr Husain was backed by 447 MPs and Mr Subba Rao by 278.

The Congress nominee got a majority of votes in 12 States, including three where non-Congress Governments are in power, West Bengal. Punjab and U.P. But the other five non-Congress States – Bihar, Kerala, Haryana, Madras and Orissa voted solidly for Mr Subba Rao.

The result was officially announced by the Returning Officer, Mr B. N. Banerjee, Secretary, Rajya Sabha. at 3 p.m., though the counting of ballot papers was over an hour earlier. The counting started at 10 a.m. in Room No. 63 of the Parliament House.

It was a thrilling finale to the drama that had been exciting the imagination of the entire country for the last one month. Fortunes of the two leading candidates fluctuated every hour of the counting and an element of suspense was maintained as box after box was unsealed.

Members of the Congress Working Committee, which was in session at the AICC office, had seconded their camp. The communal and regional factors that were sought to be exploited by the opposition against Dr Husain obviously did not work.

With three exceptions, the Congress members in the Congress States stood by the party, besides getting additional support from the opposition. In Gujarat, Dr Husain was backed by 96 electors (party strength 92), in Assam by 84 against 72, in Mysore by 133 against 126 and in Rajasthan by 95 against 89.

But Congress leaders here were not fully satisfied with Andhra Pradesh and Madhya Pradesh, although in the first flush of enthusiasm, they were apparently minimizing its significance. In Andhra Pradesh, Dr Husain got 15 ballots short of the Congress quota. It was explained as the result of local and personal ties in Mr Subba Rao’s home-State. But since there are pro-Congress elements among the Independents and dissidents among the Congress, defecting on a bigger scale are not ruled out. In Madhya Pradesh, Dr Husain got seven ballots short of the total party strength. This also shows that the State Congress is not free from dissidence.

Opinions varied on the factors that were responsible for Dr Husain’s victory. The Congressmen proudly presented the result as an indication of the party’s soundness That the Congress had united in voting for Dr Husain was conceded by most opposition leaders. Some blamed their colleague, Dr Ram Manohat Lohia. for has ing united the Congress ranks by conjuring up the possibility of the Congress exit from power at the Centre in case of Mr Subba no’s success. The SSP leaders. n the other hand, put the blame on the Communists and a section of the DMK. It was generally agreed that the Muslims and other minorities like the Akalis had voted for Dr Husain. This, it was pointed out, accounted for increased support for the Congress candidate in West Bengal, Assam, i.P.. Madras. Kerala and Punjab. As was expected, the number of ballots polled by Dr Husain was less than the number secured by Mr V. V. Giri in the Vice-Presidential contest. Dr Husain did not get the support of 36 MPs who had voted for Mr Giri (this number may be 28 if the eight nominated MPs who took part in the Vice-Presidential contest is deducted). On the other hand, the opposition improved its performance in Parliament in the Presidential contest, for Mr Subba Rao was backed by 278 electors against 193 who supported Mr Mohammed Habib, the opposition nominee. The Vice-Presidential contest,however, was not a true index of the opposition strength as some 60 of them, it was known, had not participated in the voting. Hyderabad: Andhra Pradesh Chief Minister K. Brahmananda Reddy told UNI that “regional and group considerations” were the causes for defections ‘of some Congress legislators in the Presidential election. Dr Husain received votes from 150 Andhra Assembly members which has a strength of 286. The Congress has a membership of 165 in the House and about 25 opposition members are believed to have supported the candidature of Dr Husam. This showed that between 30 and 40 Congress members voted for Mr K. Subba Rao. Lucknow: The Congress opposition in U.P. attaches great political significance to the fact that its candidate, Dr Husain, has poll. ed more votes in the State than Mr Subba Rao, who was backed by the SVD, our Special Correspondent reports. A Congress spokesman told newsmen that Chief Minister Charan Singh should now consider that he was heading a minority party. He added: “Dr Lohia had been insisting that in the event of Mr Subba Rao’s victory, the Indira Gandhi Government would have to resign. Now, when the boot is on the other leg, what advice should Dr Lohia give to the nou. Congress governments in U.P., Punjab and West Bengal, where Dr Husain had polled more votes? Should he not ask these Governments to resign on the analogy of his remarks about the Central Government? Dr Lohia must pursue his logie to its end.” Two hundred and ten members of the U.P. Assembly voted for Dr Husain and 200 for Mr Subba Rao. Thus Mr Husain polled one vote more. Three votes were declared invalid. This means that 14 members of the SVD voted with the Congress. For the Congress had a strength of 182 on the day of Presidential election, besides the support of 15 Independents, who have not yet been admitted into the party. One Congress member was absent.