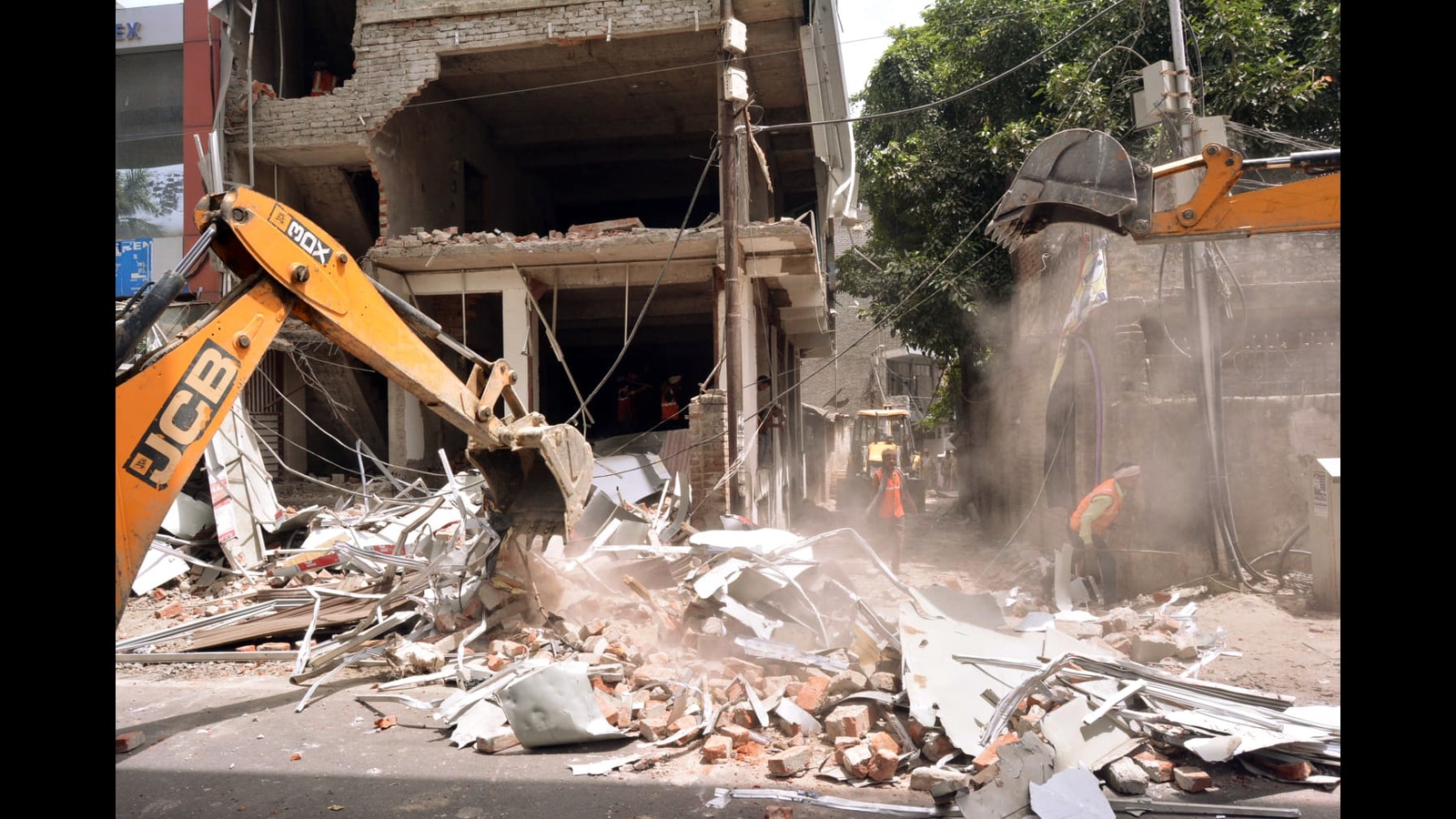 Kanpur/Meerut: The administration in Uttar Pradesh’s Kanpur and Saharanpur districts on Saturday demolished buildings belonging to people they alleged were involved in separate violent protests or their relatives.

In Kanpur, a multi-storey building that the police claimed belonged to a close relative of the alleged mastermind behind the June 3 violence, Zafar Hayat Hashmi, was demolished using two bulldozers on Saturday morning amid heavy police presence in the Swaroop Nagar locality of the city.

The Kanpur Development Authority (KDA), which took the action, described it as routine and said notices were served a year ago on the owner Haji Ishtiyaq, who passed away recently. “The building was built illegally, this is why it is being demolished,” said Shatrughan Singh, KDA secretary.

Ishtiyaq’s son Iftikhar, who runs a tailoring shop in the building, however, claimed they were not served any notice by the KDA. “If my building is illegal, tell me what is illegal about it,” he said.

The 900sqft land belongs to Iftekhar’s family and a builder Haji Wasi, who was listed as land mafia, constructed the building, people in the locality, aware of the matter, told HT.

Two bulldozers reached the site early morning on Saturday and brought down some front parts of the building.

Joint commissioner of police (law and order) Anand Prakash Tiwari said the demolition was carried out in accordance with “norms and regulations”.

“There are reasons to believe that the investment has been made by the prime accused of the violence case,” Tiwari said, adding the building was lying vacant at the time of the demolition.

Iftikhar, however, said he has never met Zafar and that his family was in no sense even remotely related to him. “I should have been informed about such action, but I was not. The second bulldozing began at 8.30am while the KDA office opens at 11am. We were given no time to plead our case,” he said.

Police also arrested one Nizam Qureshi, who they claimed is another mastermind of the June 3 violence. Qureshi was among the 36 accused whose names were mentioned in the FIR lodged soon after the violence, a senior police officer said.

Tiwari confirmed the arrest. “Nizam Qureshi has been arrested from Kanpur in connection with the June 3 incident,” the officer said, adding that the accused had gone underground since the violence took place.

Violence broke out in Kanpur on June 3 against former BJP spokesperson Nupur Sharma over her comments on Prophet Mohammad.

In Saharanpur, police and district administration continued action against protesters allegedly involved in a procession taken out without permission. A joint team of Nagar Nigam (civic body), Saharanpur police and administration on Saturday used bulldozers to demolish “illegal residential constructions” of two accused — Muzammil and Abdul Wakir — who were arrested along with other protestors the previous day.

Muzammil is a resident of Rahat Colony while Wakir lives in Khata Kheri locality in Saharanpur city.

“If someone has taken law in hands, he should be punished through judicial procedure,” said Mansoor Badar, councilor of ward number 43 in Saharanpur. “It seems that bulldozing houses of a few arrested persons was done to create fear in the Muslim community. If the construction was illegal, it should have been taken into notice earlier.”

A Congress leader said such actions cause suffering to innocent family members.

“Bulldozing the house of someone without completing the legal procedure can’t be accepted. It seems everything is being done on whims and wishes of the officials on the direction of the government,” said Surendra Kapil, former Congress legislator. “Punishment should be against the culprits, but such actions force innocent family members to suffer.”