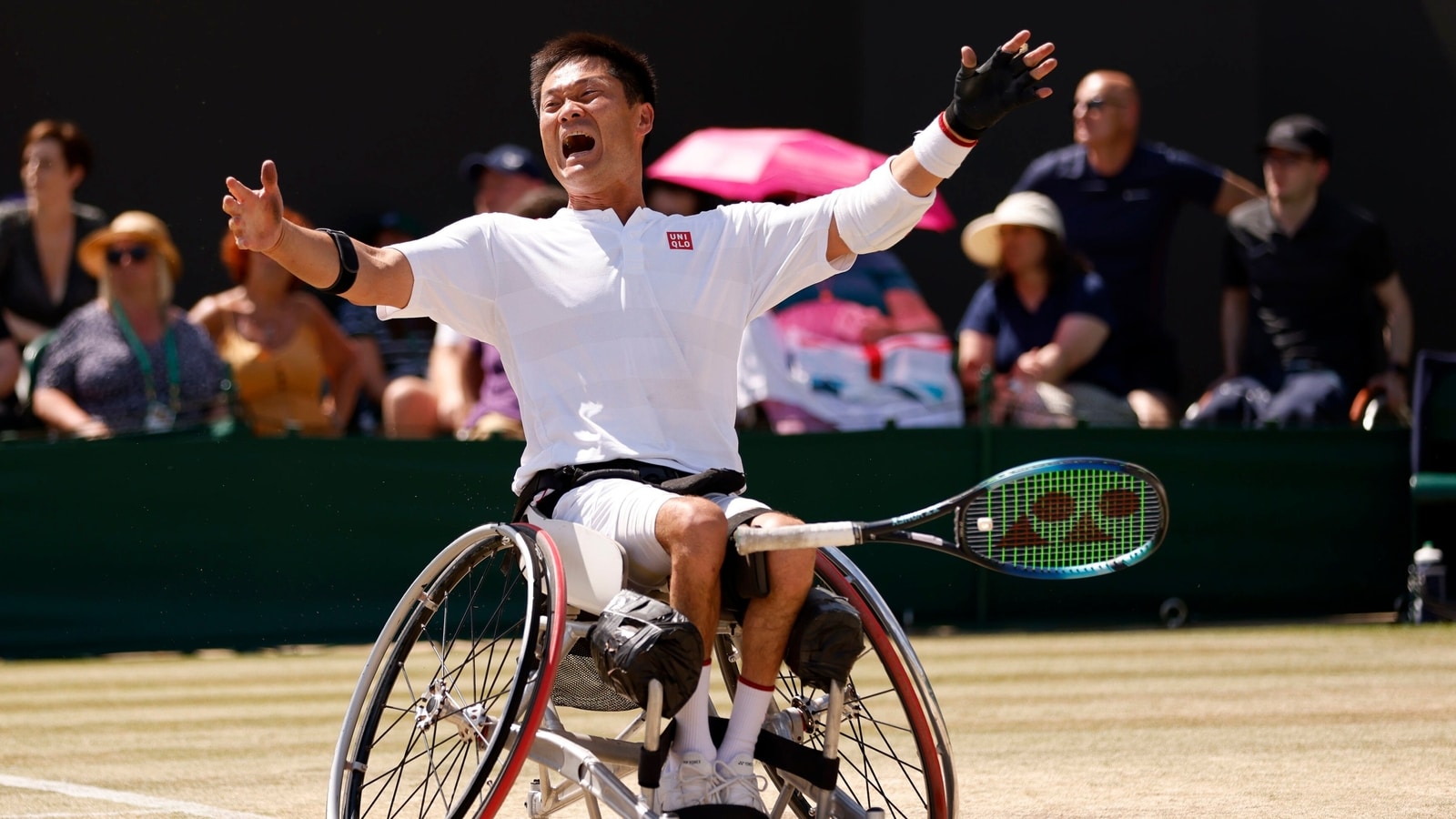 Four Paralympic Games gold medals, 48 Grand Slam titles in total, 27 of them in singles, the undisputed world No. 1 at age 38. Glance through these numbers and you’d be forgiven to assume there’s nothing more to achieve. For Shingo Kunieda though, there was a small matter of a singles title at Wimbledon.

The Japanese wheelchair tennis star is widely regarded as the greatest wheelchair player. Easy to fathom looking at his CV. Yet it had one little piece missing from the plethora of Grand Slam trophies. That too has been fitted now, and forever engrained in the sport’s history books.

Kunieda lifted his maiden men’s wheelchair singles Wimbledon title defeating Britain’s Alfie Hewett 4-6, 7-5, 7-6 (10-5) in Sunday’s final in which the Japanese rallied from 2-5 in the third set and 3-5 in the tiebreaker.

Maybe Kunieda wanted it that much more. The 28th singles Grand Slam title is arguably his most prized, for it made him the first men’s singles wheelchair player to complete a career Grand Slam. He is also the holder now of all the four Grand Slam singles titles together, having won the 2021 US Open, 2022 Australian Open and 2022 French Open.

Little surprise the Tokyo-born player couldn’t hold back his tears after winning the final point. “Really wanted to get this title,” Kunieda, who also won the doubles title partnering Argentine Gustavo Fernandez, said. “You know, my age, 38, so I was thinking it will be last chance.”

Kunieda could well have quit playing the sport after winning a memorable gold medal at his home Paralympics in Tokyo last year. However, the Wimbledon fire remained too strong to be doused even into his late thirties; Kunieda outlined winning Wimbledon as his biggest goal this season.

Incidentally, the All England Club has been home to Kunieda’s first Grand Slam title in doubles in 2006. His maiden singles crown came in Melbourne in 2007, and Kunieda since became the champion at the Australian Open, French Open and US Open on five occasions in the same year (2007, 2009, 2010, 2014 and 2015).

Singles glory at Wimbledon eluded him, partly because the tournament did not hold wheelchair singles events until 2016. One of the reasons was that for players to maneuver the wheelchair on grass while playing singles – it would entail covering a wider area on court – could be a stiffer challenge. In wheelchair tennis, the ball can be allowed to bounce twice.

Kunieda though believed he was up for the task. “Playing singles on grass will be a hard test for us, but I know we can put on a great competition for everyone,” he was quoted as saying by Wimbledon in 2016.

As luck would have it, Kunieda missed the inaugural men’s singles competition with an injury. After that, he made the quarter-finals twice (2018, 2021), semi-final once (2017) and lost in the 2019 final. A conversation with the most accomplished male player on grass, Roger Federer, helped him in this edition. “My question (to Federer) was how to play on grass and how to think when behind,” Kunieda said. It’s a feeling he is unlikely to have experienced too often in his career.

Kunieda was nine when his lower body was paralysed due to a tumor. His mother introduced him to wheelchair tennis, laying the foundation for Kunieda’s incredible dominance in the sport that has seen him notch up a 106-match consecutive match win streak from 2007 to 2010 and another 77 of them on the trot in 2014 and 2015. Add 50 Grand Slam titles to it. And the fact that he is the only wheelchair player to retain a men’s singles gold at the Paralympics in 2012 while adding another one on home turf last year. And now the career Grand Slam.

“I think this title is hardest one because of grass,” Kunieda said of his Wimbledon triumph. “But this year I could find the way to play on the grass.” And win too, finally.