The Dwarka Expressway, which is being built to reduce the Delhi-Gurugram traffic on National Highway-8 (NH-8) by about 50%, has been delayed by at least a year owing to the Covid-19 pandemic and is now expected to be ready by September 2023, senior officials in the National Highways Authority of India (NHAI) said on Monday.

The 29 kilometre-long corridor, which will also be the country’s first urban elevated expressway, was earlier slated to be ready by this August. “Now, the entire stretch will be ready by September 2023. It was delayed by the two years of the Covid-19 pandemic. In 2020, work almost came to a standstill as the entire labour force returned to their villages. Then, there were other problems arising out of the pandemic such as low cash-flow and delay in getting approvals because officials too were down with Covid-19,” said a senior NHAI official handling the project, requesting anonymity. 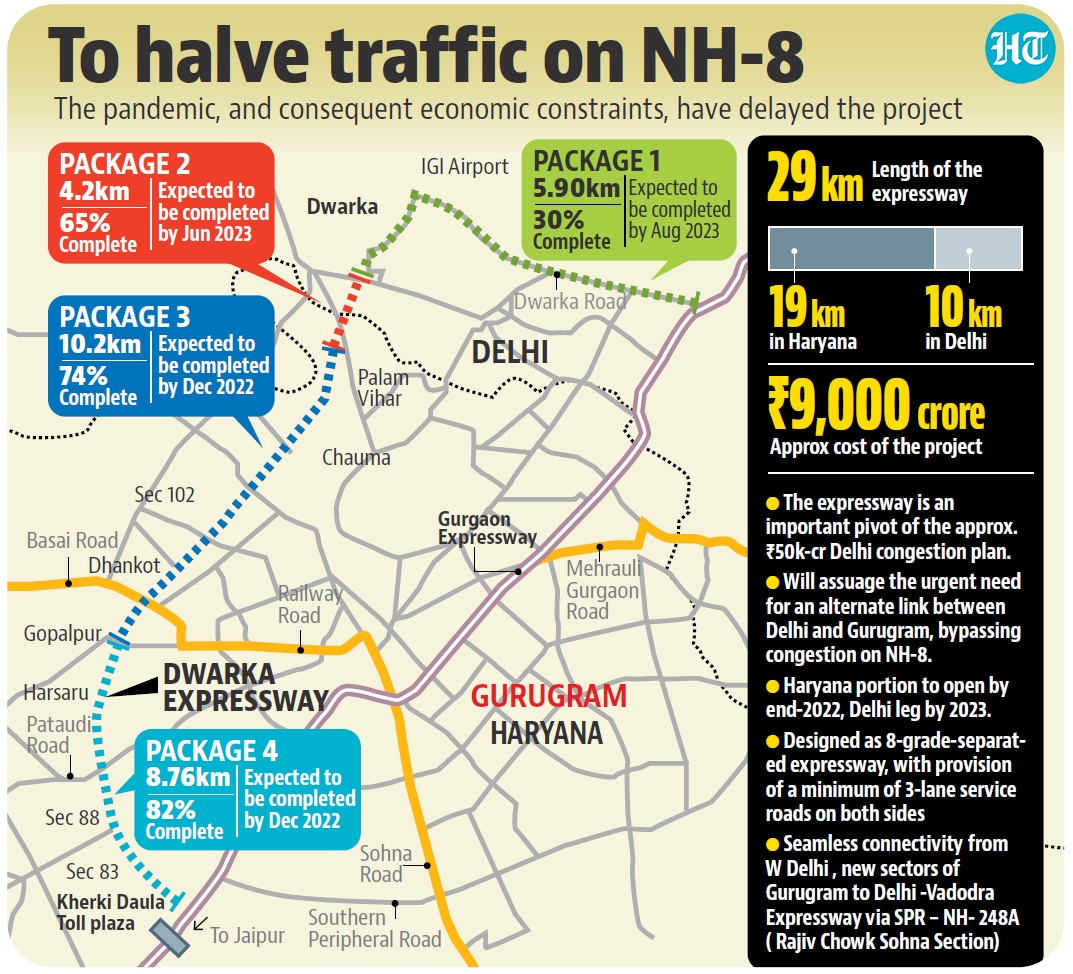 The official added that the project regained momentum only in October 2021, after all pending approvals were fast-tracked. The Haryana portion of the expressway — about 18.9km — will be made operational by end of the year, while the Delhi portion will be ready by August 2023, the official said.

“Once the Dwarka Expressway is ready, it would provide direct access to the upcoming India International Convention Centre (IICC) in Sector 25 of Dwarka, which is also the venue for the G20 Summit next year. Also, it will provide an alternative route to the Indira Gandhi International Airport through a shallow tunnel,” Union road transport minister Nitin Gadkari said on Monday.

“The Dwarka Expressway will reduce the pressure on the Delhi-Gurgaon Expressway (part of the Delhi-Jaipur-Ahmedabad-Mumbai arm of Golden Quadrilateral) and arterial roads that experience severe congestion… Around 50%-60% traffic on NH-8 will be diverted onto the new expressway, thereby improving traffic movement towards Sohna Road and Golf Course Road and their extensions. Once operational, it shall immensely help reduce the air pollution in Delhi-NCR as well,” Gadkari said.

Being built at a cost of ₹9,000 crore, the corridor, also known as the Northern Peripheral Expressway, will begin from Shiv-Murti on NH-8 (Delhi-Gurgaon Expressway) and end near Kherki Daula toll plaza, after passing through Dwarka Sector 21, Gurugram border and Basai, the NHAI said.